How to write numbers in English - 6 common mistakes 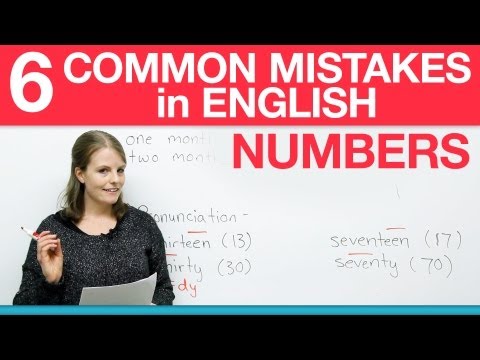 Hi there. My name is Emma, and today we are going to look at common mistakes that ESL students make when they're talking about numbers. Okay? So in this video, we will look at five different mistakes I hear my students make often and ways to correct these mistakes. So let's get started.

First we're going to look at pronunciation, the pronunciation of numbers. Okay, so the first mistake I hear often is when students are talking about time -- or things in general, but often with time -- they're talking about the month, the week, the night, the year, the day; they often forget to pronounce the "s" or they pronounce an "s" when they shouldn't. So what do I mean by this? Well, first I have "one month", "two months". So notice in this case: there's no "s" so I don't pronounce an "s". In this case there is an "s" so I do pronounce an "s". So even though it's a pretty simple rule, a lot of people when they speak, they don't do this. I hear students say all the time: "I've been here for one years." Or "I lived there for five year." Okay? So be very careful when you say numbers, make sure that the noun that comes after, if there's more than one: you need an "s" and it's pronounced, the "s" is pronounced.

Last one: "I went to Cuba for one weeks." What's the problem with this sentence? I pronounced an "s" after "week", but because there's only one, it shouldn't be "one weeks", it should be "one week". Okay? So I know this is a simple pronunciation rule, but it's something that it's very important to be careful with. So even if you have to practice at home: "One year, one year, one year. Two years, two years, two years." Keep repeating it until it becomes easy and you don't make that mistake. Okay.