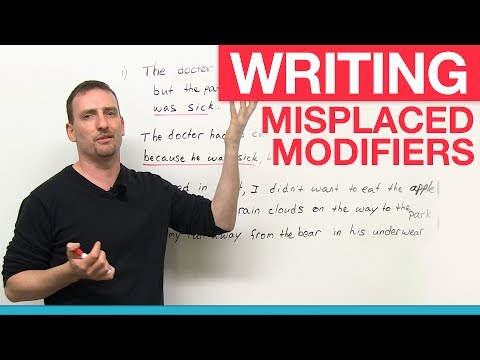 "Engvid.com is great for English learners where you can learn many new things about the language." Does that sentence seem OK to you? Well, in this lesson you will find out why it isn't and where the modifying clause should be. Misplaced modifiers are a common problem in writing and after this lesson, should be a problem of the past. Test your writing skill with the quiz here: http://www.engvid.com/writing-misplac...

TRANSCRIPT:
Hi. Welcome again to www.engvid.com. My name's Adam. Today's lesson is a little bit more advanced. It's actually very useful for native English speakers as well, not only ESL learners. Today we're talking about misplaced modifiers. Now, this is a very important grammar point, plus it's also very, very important for those of you who need to do English writing. Okay? This is a very common mistake that people will see in all kinds of writing. It could be very, very embarrassing sometimes because... You'll understand in a minute why. But I'll show you the different types and we'll figure out a way to fix it as much as we can.
So, first of all, what is a "modifier"? A modifier is anything in a sentence, it could be an adjective or an adverb, a clause, a phrase, anything that modifies something else in the sentence. What does "modify" mean? Means to change, change the meaning of, change the idea of. Okay? So, for example: if you say: "A car", you have an idea of a car. You say: "A red car", you have a different idea of the car probably. So "red" modifies "car".

Now, this word: "only" is the modifier we're looking at. It is very, very often misplaced; people don't realize that this word doesn't necessarily go where it should go half the time. It's amazing how many people misplace it. So what does this sentence mean: "I call only my mother when I'm sick"? It means: when I'm sick, I don't call my friends, I don't call my girlfriend or boyfriend, I don't call my aunt or uncle; only my mother. I'm sick: "Mom, come make me some soup, please." You have to be polite, of course.
"I only call my mother when I'm sick." It means: when I'm healthy, I don't call her. I never speak to her, only when I'm sick do I call her. She gets very angry at me, she thinks I'm using her. But according to this sentence, I am, because I only call her when I'm sick. So you understand what this word does to the sentence. Okay? Very, very important where you place it to know which word it's going to modify.
The secret about modifiers: place them close to the word you're trying to modify. But that also doesn't always work.
"People who whistle quickly become annoying."

Here's another one, this is called more... This is more of a dangling modifier:
"I went to see a movie last night with my friend, which was really boring."
Okay, maybe you understand the sentence. I don't. What was boring, the movie or the going out with the friend? This is called a dangling modifier because I don't actually know what it is modifying. I'm not sure what this "which" is, the situation or the movie. So again, to fix it, just bring it closer to the actual thing. I'm going to assume you're talking about the movie. "I went to see a movie last night which was really boring, with my friend." No, that's not a very good way to fix it either. "I went to see a movie which was really boring last night with my friend." That's much better, it's right next to the thing you're modifying. So you want to put this right here, so it modifies the movie itself. Okay? So here're three different examples of misplaced modifiers. Let's look at a few more.
Okay, let's look at a few more examples, and eventually, we'll get to some funny ones that you'll understand why it could be embarrassing.