What is St. Patrick's Day? 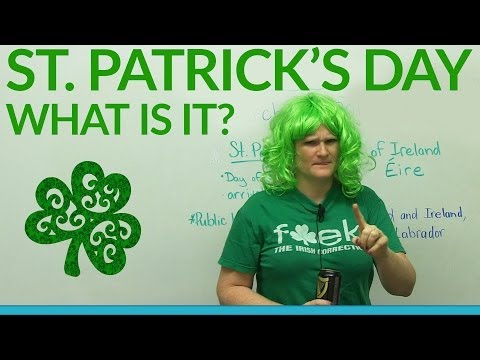 Happy St. Patrick's Day. This is a beer. It's called Guinness. It's from Ireland. There's another thing that I'd like to teach you about something from Ireland. It's called St. Patrick's Day. It happens every March 17th. This year is 2014. On March 17th, 2014, there's going to be a lot of drinking. There's going to be a lot of parties. There's going to be a lot of parades and festivals. Why? Okay. "Why is Ronnie wearing green again? Why is she wearing a green wig? Why is she wearing a green shirt? Why does her shirt say 'fek'? What does that mean?" Let me tell you. "Fek" is the Irish replacement word for a very naughty word called "f*ck". So instead of saying "f*ck", you could say "fek". It's really cool, and nobody thinks you're saying a bad word except for the people that know.

March 17th, funnily enough, represents the day of his death. So we are not 100 percent sure when the guy was born. But apparently, they know he died March 17th -- I don't know the year; it's not important. What is really important about St. Patrick and St. Patrick's Day -- especially St. Patrick -- is he marks the begins of Christianity in Ireland. Now, Christianity is a kind of religion. There are two main parts of Christianity, Catholic and Protestant. In Ireland, Catholic and Protestant people are always fighting but they have the same religion. I don't understand it either.

So in Northern Ireland and Ireland -- or the southern part of Ireland -- Newfoundland or Newfoundland, which is in Canada, and Labrador, a province in Canada, and also in the tiny Caribbean island of Montserrat, we celebrate St. Patrick's Day. And it's a public holiday. That means you don't have to go to work, and you can spend all day partying and drinking and wearing green. Doesn't this sound like a great holiday? I live in Ontario. Unfortunately, St. Patrick's Day is not a public holiday. I have to go to work unless it's a weekend.

What do we do on St. Patrick's Day? We drink. We drink a lot. Now, I was interested as to why on St. Patrick's Day people drank. And the answer is because of this thing called "lent". Now, "lent" is the six weeks leading up to Easter. Easter happens in either March or April depending on where it lies in the calendar. And lent is six weeks where people will give up one thing that is a luxury. For example, if you really, really like chocolate, you will give up chocolate for lent. If you really, really love beer, you will not drink beer -- [laughs] yeah right! You will not drink beer for six weeks -- not going to happen.

St. Patrick's Day happens to fall smack-dab in the middle of lent. So for one day, you can drink, eat, feast, party as much as you want, and we're not going to tell anyone. So the reason why people drink so much -- only on March 17th -- is it's because the one day during lent, the restrictions, or the rules, have been banished, which means you can do whatever you want.

One interesting ironic thing that I think about St. Patrick himself if history is correct is that he was not even born in Ireland. He was born in Roman England, I think known today as Wales. He's not even Irish. He was born in Wales.
원문출처 : http://www.youtube.com/watch?v=grlzfZFs0T0&feature=youtube_gdata
이 게시물을