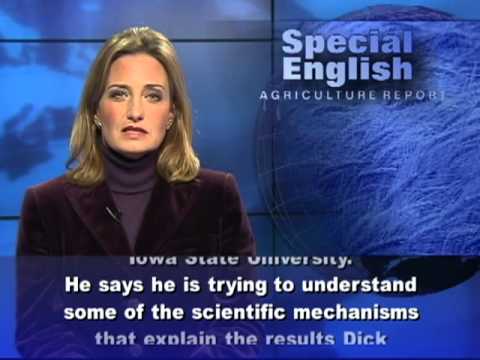 This summer, the remains of what had been Hurricane Isaac moved over the American Midwest. The storm brought rain to areas suffering from a severe drought. But the rain came too late to save many farmers' corn and soybean crops. Crop insurance will help limit financial losses.

But crop insurance is a tool that is not available to most growers in the developing world. The United States federal government helps pay for the cost of insurance against natural disasters. Not every farmer in America chooses to buy crop insurance. Dick Thompson of Boone, Iowa, says he operates his farm the way farmers did in the past. "I'm old-fashioned, and I'm proud of it," he says. Dick Thompson uses little chemical fertilizer, weed killers or insecticides. He does not grow genetically modified crops. He says his methods helped him survive the drought. And, he says, they are already earning him more money per hectare than his neighbors who farm the modern way.Scientists are trying to understand why his methods are working.

Matt Liebman has copied many of them in his research fields at Iowa State University.He says he is trying to understand some of the scientific mechanisms that explain the results Dick Thompson observes on his own farm. Many Iowa farms today grow only corn and soybeans. Payments from crop insurance keep farmers in business when their crops do poorly, as in this year's drought. But Dick Thompson says he has never bought crop insurance. Instead, he protects himself by growing other kinds of crops in addition to corn and soybeans. He raises hay and oats, along with cattle and pigs. He harvested his oat crop before the drought hit. He says, "It's common sense." But now farmers are growing hay on only half as much land as they did 20 years ago.

And oat production has fallen by almost 95 percent.Livestock production has also fallen. Dick Thompson says he will sell some of his cows and hogs, but not all of them. They provide more than money. They also make manure that he uses to fertilize the soil, instead of chemical fertilizers. The manure helps the soil hold water. Iowa State University researcher Rick Cruse says that helps crop growth even in drought conditions. And these are the stressful conditions that farmers everywhere might face more often because of climate change.