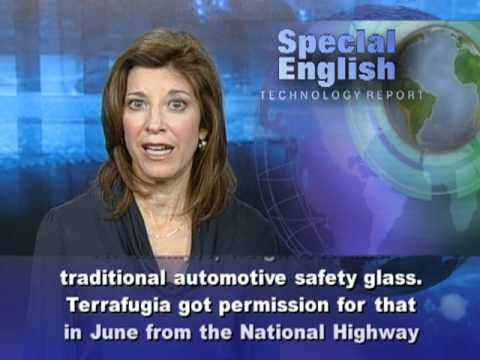 You could fill the sky with all the ideas people have had for flying cars. "But at this point the Transition is the closest to actually getting to the marketplace." So says Carl Dietrich, head of Terrafugia. His company in Massachusetts is developing the Transition Roadable Aircraft.Mr. Dietrich says "the Transition is designed to really be a general aviation airplane, like a Cessna or a Piper, a propeller-powered airplane that can fold up its wings, drive down the road and park in a single-car garage." And he says the Transition easily changes to a car in about twenty seconds.

The driver folds up the wings and transfers power from a propeller to the wheels for driving on the ground. Development began in two thousand six, and the first road and fight tests took place in two thousand nine. The Transition had to meet federal safety standards for cars and aircraft.

Last year the Federal Aviation Administration agreed to let it weigh more than other light sport aircraft. But even fully loaded, says Mr. Dietrich, it still weighs about half as much as an average car. The windows, for example, weigh less than traditional automotive safety glass. Terrafugia got permission for that in June from the National Highway Traffic Safety Administration.Carl Dietrich says the aircraft can climb to more than three thousand meters.

It can carry two people at speeds over one hundred sixty kilometers an hour in the air. And on the ground it can drive at highway speeds, around one hundred thirteen kilometers an hour.The plane needs an airport for takeoffs and landings -- and pilot training for the driver -- but it uses automotive gasoline.The company expects to complete the building process for its flying cars within the next few months.

Then it will began an intensive year-long testing program. Terrafugia expects the Transition to reach market by the end of twenty-twelve, at a price of around two hundred fifty thousand dollars. Carl Dietrich says nearly one hundred people have already signed up as buyers. He hopes to sell as many as a thousand a year in the near future.

He says: "That will not have any appreciable or noticeable impact on the air traffic control infrastructure in the foreseeable future today. Now, twenty years down the road, who knows?" For VOA Special English, I'm Carolyn Presutti.

For more technology stories and activities for people learning English, go to voaspecialenglish.com.