Water Problems in a World of Insecurity 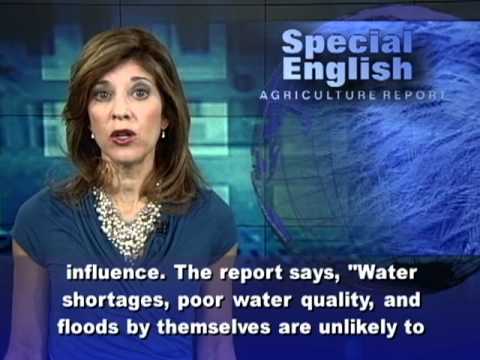 An American intelligence report says water-related problems will likely increase tensions around the world in the next ten years. These problems include water shortages, poor water quality and floods. The report says the problems will increase the risk of instability and the failure of governments. However, countries are seen as unlikely to go to war over water.

The report says water tensions have historically led to more water-sharing agreements than violent conflicts. But beyond ten years, it warns that some governments could use water as a weapon to pressure others. And water could also be used to "further terrorist objectives." The report is called an Intelligence Community Assessment on Global Water Security. It looks at possible effects of water problems on United States national security interests over the next thirty years. It says the areas that will be most affected by water problems are North Africa, the Middle East and South Asia. Secretary of State Hillary Clinton announced the report on World Water Day, which was observed March twenty-fourth. The National Intelligence Council wrote the report based on a National Intelligence Estimate she requested a year ago.

The report says water-related problems could distract countries from working with the United States on important policy goals. But it also predicts an increased demand for American aid and expert help to solve those problems. That demand could create "opportunities for leadership" and influence. The report says, "Water shortages, poor water quality, and floods by themselves are unlikely to result in state failure."

But these could combine with poverty, social tensions, environmental problems, poor leadership and weak governments to produce social disorder. And that combination could cause state failure. The report predicts that from now through twenty forty, "water shortages and pollution probably will harm the economic performance of important trading partners."

During the next ten years, it says, the loss of groundwater supplies in some agricultural areas will create a risk to national and global food markets. These shortages will be a result of poor management. Agriculture uses about seventy percent of the world's freshwater. The report says technology that reduces the amount of water needed to grow crops will offer the best defense against shortages.