Let's Learn English Lesson 20: What Can You Do? 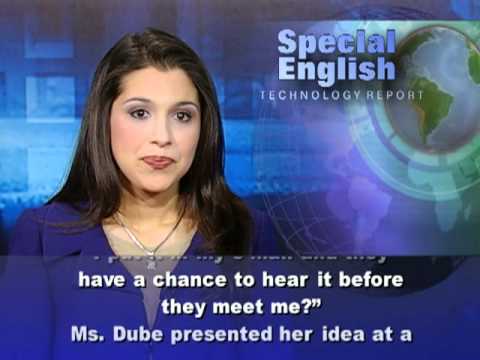 A new online service offers a simple way to let other people know how to say your name correctly. It lets others hear you say it yourself in your e-mail.Today, more people from different cultures work, live and study together. Some worry that having a difficult name could limit them. Just ask Sheetal Dube. She and her husband came to the United States from India seven years ago. She says, "Sheetal is a very common Indian name and in India people would just know how to pronounce it. But I've been working here in the U.S. for some time and I realize people find it hard to pronounce. They haven't heard it before." Ms. Dube was a user experience consultant for technology companies. She now owns a new company called Audioname. She came up with the idea after doing a presentation with someone she worked with. She says, "My colleague was Mary and it was very easy for everyone in the room to say, you know, 'Mary's findings showed this.' But it's very difficult to say 'Sheetal's findings showed this.' So that's where this idea really stuck in my head. It's like, you know, what if I just have an audio name and, you know, I put it in my e-mail and they have a chance to hear it before they meet me?"Ms. Dube presented her idea at a business development conference in Portland, Oregon, earlier this year. It won the top award at the event called Startup Weekend Portland. The service is free. Ms. Dube hopes her idea will help make introductions a little easier. People can put a recording of their name in their e-mail signature, their Facebook page, their LinkedIn account or their website. The Portland Seed Fund chose her idea as one of one hundred twenty-six startups to receive money and mentoring support from experts. Ms. Dube left her job to start audioname.com. The site has been live since the middle of September.Marketing specialist Larry Chiagouris is the author of "The Secret to Getting a Job After College." He advises people with really difficult names to consider using a nickname in their job search. Sheetal Dube says she heard advice like that while researching her idea. She thinks a service like Audioname offers a better choice. There are also sites like HearNames.com where people can learn how to say names from around the world. On our site, voaspecialenglish.com, you can find a link to VOA's own Pronunciation Guide to names in the news. For VOA Special English, I'm Alex Villarreal.