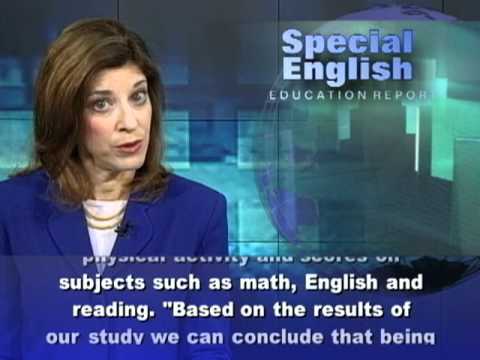 Recently we told you about a finding that more years of school could help students get higher scores on intelligence tests. That was the finding of a study of teenage males in Norway. Now, other research shows that physical activity may help students do better in their classes. The research comes as educators in some countries are reducing time for activities like physical education. They are using the time instead for academic subjects like math and reading. Researchers at VU University Medical Center in Amsterdam reviewed the results of fourteen studies. Twelve were from the United States, one from Canada and one from South Africa. The studies appeared between nineteen ninety-seven and two thousand nine. They included more than fifty-five thousand children, ages six to eighteen. Researcher Amika Singh says the studies showed a link between physical activity and scores on subjects such as math, English and reading. "Based on the results of our study we can conclude that being physically active is beneficial for academic performance." Ms. Singh offers some possible explanations. "There are, first, physiological explanations, like more blood flow, and so more oxygen to the brain. Being physically active means there are more hormones produced like endorphins. And endorphins make your stress level lower and your mood improved, which means you also perform better." Also, students involved in organized sports learn rules and how to follow them. This could improve their classroom behavior and help them keep their mind on their work.The study leaves some questions unanswered, however. Ms. Singh says it is not possible to say whether the amount or kind of activity affected the level of academic improvement. This is because of differences among the studies. Also, they were mostly observational studies. An observational study is where researchers do not do controlled comparisons. They only describe what they observe. So they might observe that physically active students are more likely to do better in school. But that link does not necessarily mean being active was the cause of those higher grades. The researchers called for more high-quality studies to confirm their findings. They said they found only two high-quality studies. They also pointed out that "outcomes for other parts of the world may be quite different." The findings appeared in the Archives of Pediatric and Adolescent Medicine. For VOA Special English, I'm Carolyn Presutti.