Gut Bacteria: We Are What We Eat 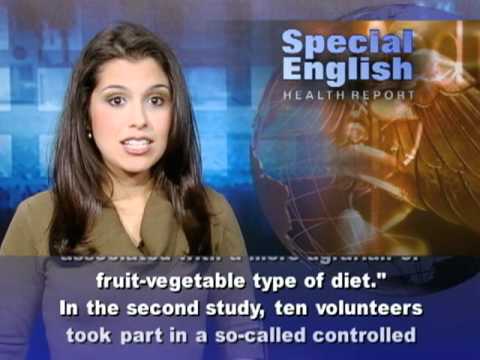 The human digestive system is full of bacteria -- mostly good bacteria. These organisms help break down food so the body can use the nutrients. Scientists are exploring the link between what kinds of bacteria live in our gut and what kinds of food we eat. Gary Wu from the University of Pennsylvania and other scientists did two studies. These studies looked for connections between the food that people ate and the kinds of microbes living in their intestines. Mr. Wu says, "We found essentially that there are two major categories in which individuals could be classified by the bacteria in their gut: one associated with sort of a western-type diet, and another one associated with a more agrarian or fruit-vegetable type of diet." In the second study, ten volunteers took part in a so-called controlled feeding experiment. They had to change their normal diet. Yet their digestive bacteria remained much the same. This suggests that the mix of bacteria is based on long-term dietary patterns, not what people ate in recent days. Gary Wu thinks testing people's mix of intestinal bacteria might be a better way to measure their disease risk than asking about their diet. He says intestinal bacteria might even play a part in the development of disease. If so, this could lead scientists to new ways to help prevent diseases by changing the types of bacteria in a person's gut. "That's a little more speculative," he says, "but that's something that is certainly very much of interest in the field." The two studies are in the journal Science. The research may add to understanding of how diet affects health. Another recent study involving diet warned that obesity is increasing worldwide, but especially in the United States and Britain. The findings appeared in the Lancet medical journal. Worldwide, experts say one and a half billion adults are overweight. Another half-billion are obese. At current rates, about half of all American adults could be obese by twenty-thirty. In Britain, obesity rates could reach forty-eight percent for men and forty-three percent for women. Experts say the rise in obesity is likely to lead to an increase in cases of diabetes, heart disease, cancer and other conditions. Obesity is also on the rise among children.For VOA Special English Health Report. I'm Alex Villarreal.