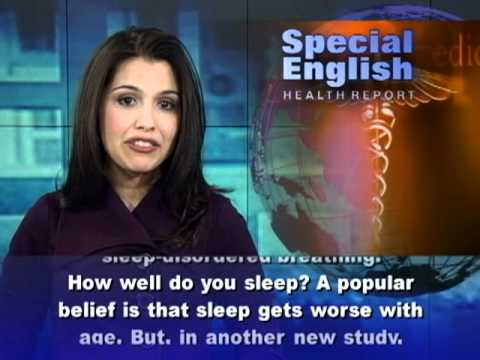 In a new study, researchers asked parents about their children's breathing from when they were babies up to about age six. The parents also answered questions about behavior at ages four and seven. Karen Bonuck at the Einstein College of Medicine in New York led the study of about eleven thousand children. She says sleep-disordered breathing was associated with a fifty percent increase in what she calls "adverse neurobehavioral outcomes." These included hyperactivity, aggressiveness and problems relating to other children.Ms. Bonuck says the more serious the breathing problems, the more serious the behavioral issues were likely to be.

Other studies have linked sleep with children's behavior, but this study was extensive enough to reject other possible causes. The study appeared in the journal Pediatrics. An estimated one child in ten snores regularly. A smaller number suffer from other sleep-disordered breathing. How well do you sleep? A popular belief is that sleep gets worse with age. But, in another new study, those who reported the fewest problems with sleep quality were people in their eighties.Researchers did a telephone survey of more than one hundred fifty thousand American adults. Michael Grandner at the University of Pennsylvania medical school says the original goal was to confirm that aging is connected with increased sleep problems. The survey did find an increase during middle age, worse in women than men. But except for that, people reported that their sleep quality improved as they got older -- or, as Mr. Grandner points out, at least they felt it did. The findings are in the journal Sleep. Health problems and depression were linked with poor sleep.

But Mr. Grandner says older people who are not sick or depressed should be reporting better sleep. If not, they need to talk to their doctor. "They shouldn't just ignore it," he says. Nor should their doctor ignore it. He says health care providers generally dismiss sleep complaints from older adults as a normal part of aging. For VOA Special English, I'm Alex Villarreal. Get more health news and learn English at voaspecialenglish.com. * sleep disordered breathing 1. 수면과 관련된 호흡장애 2. 수면장애호흡