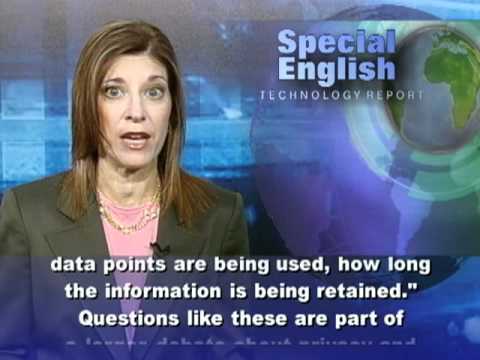 Today we take another look at facial recognition systems. These can tag friends in Facebook photos or help police identify suspects in the recent riots in Britain. Kurt Roemer is chief security strategist for Citrix Systems in Fort Lauderdale, Florida. He says technology makes it easier than ever for governments to identify and target people. "And it is very much a fine line between effective law enforcement and privacy."Kristene Unsworth researches information policy at Drexel College in Philadelphia, Pennsylvania. She says she is concerned that governments and police are increasingly using facial recognition software without clearly defined policies. "There is so much secrecy around this information that we don't really know how these kind of images or other sorts of personal data points are being used, how long the information is being retained." Questions like these are part of a larger debate about privacy and free speech. After the riots, British Prime Minister David Cameron raised the possibility of interfering with social networks. He said the question was whether it would be right to stop people from communicating "when we know they are plotting violence, disorder and criminality."China's official news agency Xinhua says the British government "recognized that a balance needs to be struck between freedom and the monitoring of social media tools." Xinhua added, "We may wonder why western leaders, on the one hand, tend to indiscriminately accuse other nations of monitoring, but on the other take for granted their steps to monitor and control the Internet."Europe has some of the world's strongest policies on privacy rights. But Kurt Roemer says, like other western governments, they have not clearly defined their policies on new technologies. "China calling that out really shows that we have some issues to address here from a policy perspective, in addition to technology." One debate involves an action in San Francisco on August eleventh by the Bay Area Rapid Transit system. BART disabled wireless service in some of its underground stations for three hours. It says protesters were planning to use mobile devices to organize activities to disrupt train service. BART has faced protests over what activists say is police abuse by transit officers. BART says it acted to protect public safety. The American Civil Liberties Union of Northern California says the decision was in effect an effort by a government agency "to silence its critics." For VOA Special English, I'm Carolyn Presutti.