A Campaign Against Alzheimer's Disease 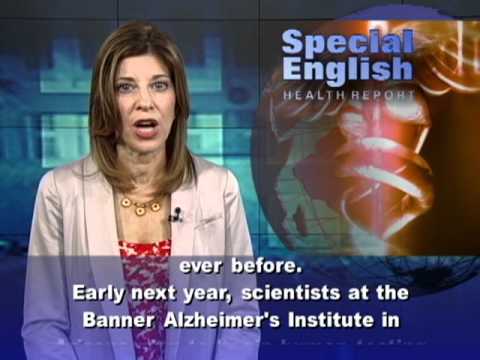 The United States government recently announced a major education and research campaign against Alzheimer's disease. The brain-wasting disease has no cure. The plan includes more efforts to develop drugs to prevent it. In the United States, more than five million people have Alzheimer's or some other form of dementia. As the population gets older, the number is expected to reach almost eight million by twenty-thirty. By then, experts say Alzheimer's and other dementia disorders could affect as many as sixty-six million people worldwide.

The national Alzheimer's plan calls on scientists to develop treatments to prevent the disease by twenty twenty-five. Officials at the National Institutes of Health have promised fifty million dollars to help support that effort. NIH held a conference of the nation's top Alzheimer's researchers where NIH Director Francis Collins discussed the plan. He said that researchers have learned more about the disease in the past few years than probably ever before.

Early next year, scientists at the Banner Alzheimer's Institute in Arizona plan to begin human testing of an experimental drug. The drug is called crenezumab, and the hope is it will prevent Alzheimer's. The study will involve members of a large extended family living in villages in the Medellin area in Colombia. Some of the family members have a rare genetic disorder that causes them to get early-onset Alzheimer's. They begin to show signs of mental loss in their mid-forties and fully develop the disease by their early fifties.Three hundred people have agreed to be in the study. One-third of them will receive crenezumab. The others will be given a placebo, a pill that does not contain any drug. They will not know if they have been given the drug or the placebo.

The study will also include a smaller number of people in the United States.Pierre Tariot will help lead the study, known as a human trial. He says all of the people have been informed that the drug might not work or that they might receive a placebo. Mr. Tariot says the people still wanted to be in the study because the disease has affected every generation for centuries.Scientists hope that if the drug works in those facing early-onset Alzheimer's, then it might also help older adults.The study in Colombia could take as long as five years, but researchers believe they could get results in two years. For VOA Special English, I'm I'm Carolyn Presutti.(Adapted from a radio program broadcast 23May2012)